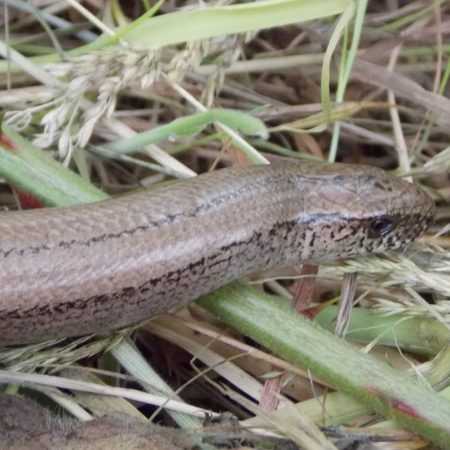 Just as the scars of recent industrial activity have presented geologists with an unparalleled opportunity to view the story of life on our planet, so the former stone quarries beneath The Ercall have provided new vistas for our native reptiles. Three of the UK’s six species have been recorded both here and at nearby Maddock’s Hill, no doubt taking advantage of the wide assortment of closely-linked habitat features to be found within these richly varied brownfield sites. Widespread but hard to pin down, an encounter with a Grass Snake or Common Lizard is truly an experience to savour. However, with an exquisite metallic finish and a variety of custom colours worthy of any luxury car range, it’s hard to compete with the allure of an equally elusive legless lizard that sounds like it should be anything but! The Slow Worm (Anguis fragilis) spends much of its time undercover, supposited in subterranean burrows or ensconced deep in the woodland leaf litter layer. Yet, much like a vintage classic emerging from a garage, it throws off the covers and emerges from its off-season slumber in early spring, when it can readily be viewed basking in sunny places, especially of a morning.  Unsurprisingly, this uncharacteristic burst of activity is really preparation for the breeding season, with a batch of live young eventually arriving in late summer. True to form, these golden-brown newborn are equally distinctive, possessing a continuous black strip along the body (we could mention ‘go faster’ stripes but that’s quite enough car analogies for one paragraph!) that disappears in adulthood.

Quick ID: legless lizard with shiny, metallic scales and variable colouration on the dorsal side and flanks. Measuring up to 40cm, their lack of markings, blunter tails and eyelids are all features distinguishing them from snakes.

When and Where: The Ercall Quarries, Maddock’s Hill Quarries and the Ercall Pools.

Back to top ten