Limekiln Wood is home to the most diverse array of soils found anywhere in Shropshire. A product of its complex geology, these varied ground conditions provide the ideal growing agent for an equally wide-ranging assortment of plants, of which over 150 species have been recorded here…

The Early Flower Catches the Sun

Typically moist and shady, with a rich, herbaceous understorey, these deciduous woodlands are especially good for plantlife that thrives in springtime, before the trees are fully in leaf. Many of the low-growing species found here are capable of colonising large areas of the forest floor on creeping rhizomes, or extensive runners, creating dazzling displays that make this possibly the most rewarding time of year to visit the Wrekin Forest. With a variety of growing requirements, these plants can also help us make sense of the jumbled geological picture beneath our feet. 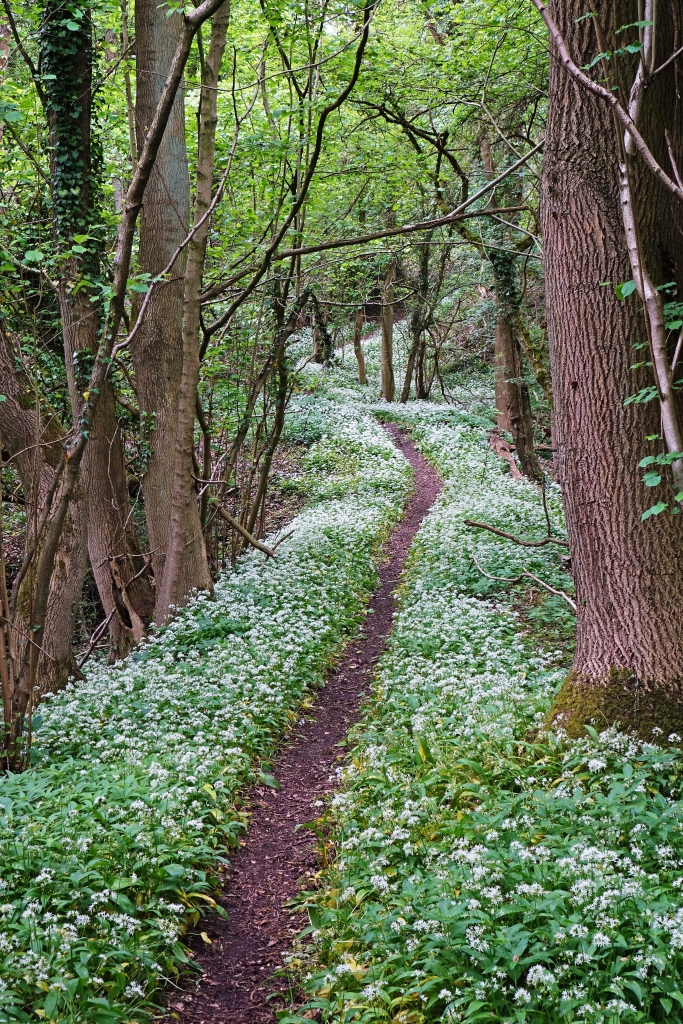 The early months of spring in Limekiln Wood seem to be dominated by the colours of yellow and white. However, in areas where the woodland overlies limestone, one of the earliest flowering plants is a fairly unremarkable, leafy species with tiny flowers borne on long stalks. The presence of Dog’s Mercury is indicative of well-draining calcareous soils, upon which it can become a dominant presence. In damper places, late February can also bring the first sighting of a true classic of the genre: Primrose. This low-growing evergreen, with its unmistakeable orange-centred, yellow five-petalled flowers is declining in the wider countryside but, where clay soils predominate, the shady rides of Limekiln Wood offer succour increasingly absent elsewhere.

Lesser Celandine is another yellow, patch-forming plant that is among the first woodland wildflowers in bloom — traditionally around February 21st. Like Primrose, its shiny elliptical petals are hard to mistake and it also has a predilection for damp, clayey soils, upon which it can spread rapidly. With cold weather in the ascendancy at this time of year, this plant’s old country name of ‘pilewort’ is especially pertinent, for it was once used as a curative treatment for the painful condition of the same name!

March and April are the months when white wildflowers really come into their own in Limekiln Wood. Chief among them is Ramsons, a foamy flowered carpet-former so expansive it could persuade the more shortsighted walker there is still snow on the ground. Its pungent aroma easily explains why it is also known as Wild Garlic but such redolence is actually a product of its leaves beginning to wither, and is often a sign warmer weather is on the way. Conversely, the distinctive, six-petalled flowers of Wood Anemone droop downwards in bad weather. Like Ramsons, this classic species of ancient woodland spreads on root growth (for its seeds are mostly infertile), so what looks like a hundred plants could in fact be just one blooming individual!

For this author, the most delightful of all the Limekiln Wood’s white spring flowers are the cup-shaped, lilac-veined, half-nodding inflorescences of Wood-sorrel. Another, low-growing, creeping perennial, its five-petalled flowers are also capable of carpeting large areas of moist, shady woodland (even amid conifers). Like Ramsons and Wood Anemone, it also possesses barometer-like qualities, for its shamrock-like, trifoliate leaves fold-up before rain.

Aside from telling us about soil quality, weather and climate, wildflowers such as Wood-sorrel and Wood Anemone are also indicative of ancient woodland and, to paraphrase Yoda, ‘there are others’! Sweet Woodruff is a delicate, carpet-forming plant that blooms between April and June, typically growing alongside the trunks of trees on the main path that bisects Limekiln Wood and Short Wood. Highly distinctive, its crucifix-shaped, four-petalled white flowers are borne on delicate umbels and this widespread species is right at home on soils overlaying limestone.

Long-established woodlands are also the preserve of Wood Speedwell, another plant often found frequenting the margins of the same boundary path that separates Short Wood from Limekiln Wood. Four-petalled, lilac-blue in colour, and with two prominent pale stamens, its flowering period is roughly coterminous with both Woodruff and Yellow Pimpernel, with which it shares a preference for damp, shady conditions. Evergreen, with pointed, opposite facing leaves, this member of the primrose family has bright-yellow, five-petalled flowers that are easy to recognise once encountered.

How have we got this far without mentioning the Bluebell? While not as prolific here as on the slopes of The Wrekin, this perennial spring classic is nevertheless present in Limekiln Wood, where it regularly carpets the forest floor alongside Ramsons. While it might appear plentiful, our native bluebell is not nearly as numerous as it once was. It is threatened by habitat loss, plundering for bulbs (from which it is legally protected by the Wildlife and Countryside Act, 1981) and the ongoing threat posed by its Spanish counterpart (which is a paler shade of blue, largely unscented, and has trumpet-shaped flowers that spread out at the end and grow all round the stem).

As spring turns to early summer and the bluebells begin to fade look out for Sanicle, the wildflower that often replaces it in shady beech, oak and ash woodlands overlying calcareous soils. A member of the carrot family, its distinctive pinkish-white flowers resemble tiny rolled-up newspapers when first in bloom, forming small, uneven but well spaced umbels. Look out, too, for its three to five lobed leaves, which grow around the lower part of the stem and are a good guide to identification. Like Bluebell, Sanicle is widespread but is declining in some areas as a result of habitat loss.

A Word about Woodland Management

Many of Limekiln Wood’s spring wildflowers can be found throughout the Wrekin Forest wherever damp, shady conditions (and plenty of shrubby undergrowth) proliferate. These plants time their flowering to coincide with the period when deciduous trees are leafless, enabling maximum exposure to all available sunlight. In this respect, their activities are very much aided by active woodland management and, specifically, the art of coppicing — where trees are cut back successively over many generations. Evidence of the practice exists all across the slopes of The Wrekin, with typical examples sporting multiple trunks radiating from a central bole. Sadly, woodland management is nowhere near as common as it once was but in the north of the forest, around Short Wood and Dairy Pit Coppice, signs of such activity are returning. Sensitive canopy management can be hugely beneficial to wildflowers, so keep an eye out for fresh log piles and recently disturbed soil when scanning the woodland for plants.